A major part of the Mayurbhanja district of Odisha, city of Baripada is also the district headquarters. It is one of the famous tourist destinations of the Mayurbhanja District. The world famous wildlife reservoir Similipal is said to be the most integral part of Baripada. The wildlife park of Similipal covers a vast area which is covered with several lush valleys, many ancient time temples, acres of forest lands and plethora of natural scenes and wild animals. 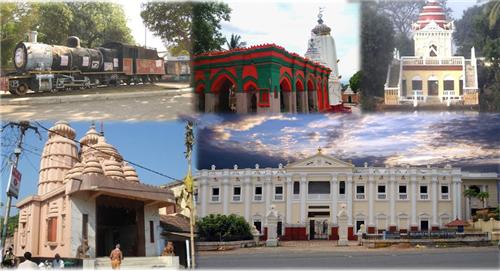 About Baripada it is being said that after the holy city of Puri, it is the only city of the country which organizes the grand Ratha Yatra of Lord Jagannath, Lord Ballabhadra and Goddess Shubhadra. Baripada is also known for the famous Chau dance form of the Mayurbhanja district. Even one of the most important wings of Odisha State Armed Police (OSAP) is also located at the city of Baripada. The market of Chandanpur is famous for the “Tusser” fabrics which is one of the highest preferred markets of Baripada.

During the Bhanja Dynasty rulings in the 15th century Baripada was said to be the capital of the dynasty. Even now, the ruins of the dynasty and he temples and monuments built during that time are still found at a place called Haripur located at a distance of around 16 km for the main city of Baripada. There are several other ruins of the dynasties that ruled over the Mayurbhanja dynasty of that era and can be easily found at the Rasikaraya temple and the most special attraction of these ruins in the Darbar hall, where the gathering of the king used to happen, is still there in a form which signifies the past of Baripada. Among the architectural history of Baripada the present Maharaja Purnachandra College and the Building of Collectorate are some of the epic examples of the architecture and construction landmarks of Baripada.

With a population of 143,355 the city of Baripada has gained a lot of pace in development in the recent past. The transportation connectivity has improved to a great extent with the introduction of Baripada – Buramara – Chakulia rail lines along with the ‘broad gauge’ line connecting the Bangiriposi with that of the Baripada. In the education field Baripada has been allotted with NOU and FMU with several general colleges under it. After the independence of the country the city of Baripada has witnessed several changes in its economy. Several industry especially the cotton and apparel industry has grown to a great extent. For more on administration of Baripada, click here

Geography and Climate of Baripada

Baripada is situated at 21.94°North and 86.72°East with an average altitude of around 36 meters. The temperature of Baripada mostly remains humid all around the year and in summer it reaches close to 40 °C while during winters it falls as low as 14 °C. Baripada enjoys moderate to heavy rains during the rainy months between the months of June to September.

The city of Baripada is blessed with plethora of natural resources which makes the economy of the town a forest products based economy. Now-a-days with the increase of deforestation several saw-mills were shut down located at the nearby places of Baripada. The Sabai-Grass plantation is also one of the basic factors influencing the economy of Baripada. It is believed to be an African breed of grass that was first planted at the Hamilton Garden and these grass only grow on the volcanic red soil which contains the strong elements of fiber.

The Economy of Baripada is boosted by several cultivated crops such as cashew nuts, ground nuts and many more. In other agricultural and forest products, the Cona or Bowls and the Plates or Khali which are made by the leaves of the Sal trees is also one of the most promising professions of many Baripada residents. Many people of Baripada are also engaged in the preparation of these Khali and Dona since decades and are earning their livelihood since then. The city of Baripada has several brick kilns located on the banks of Budhabalaga River, which is said to be the only persistent river that flows across the city of Baripada. Till date the timber is the only major source of income for the residents of Baripada. For more on economy of Baripada, click here

Art and Culture of Baripada

The entire state of Odisha is said to be very close to the Artistic and Cultural aspects. And hence the city of Baripada is no where left behind in it. Most of the Oriya Film Industry artists commonly known as Ollywood artists are believed to be from Baripada. The globally famous Chau dance form was originated from Bariapda itself. Of all the festivals and fairs organized all around the year, the Chaitra Parva has its own importance and it is organized in the month of April where several talented artists from across the country take part and portray their talent. The group of Dakshinsahi and the Uttarsahi are said to be the two of the powerful groups that perform during this fest along with several other participants. Baripada is also famous for the Jhumar song which is also believed to be originated here.

Festivals and Fairs Celebrated in Baripada

After the divine city of Puri, Baripada is the only city of the entire country which celebrates the Car festival of God Jagannath, The famous Rath Yata with equal enthusiasm. For this reason Baripada is also known as the Dwitiya Srikhetra which means second Puri. The trend of only women pulling the ratha of goddess Shubhadra began at Baripada and which was then followed at several places including the Jagannath Dhaam, Puri. This has become of the traditions of Baripada.

The city of Baripada is located in the lap of the Mother Nature and hence blessed with several tourist attractions as well. Similipal famous for the National Park is located at Baripada and is believed to be spread on a gigantic evergreen jungle which includes various flora & fauna, along with a group of rivers flowing the year long. The other special attraction of Baripada includes the Deokund – a stunning picturesque located around the green forests along with the marvelous waterfalls. The Kichakeswari temple located at Khiching near Baripada is also said to one of the major tourist spots of the city. Bhimkund, Haripur, Manatri Devagram, Lulung, Samibruksha, Simla, Kuliana, Kuchai are some of the major tourist spots located at the nearby places of Baripada. For more on tourist places in Baripada, click here

Baripada being located at the forest and jungle zone of the state of Odisha has mainly the typical dishes of Odisha are being served and enjoyed by the residents of Baripada. Varities of cakes which are commonly known as “Pitha” which includes the Manda, Chakuli, Kakara, Podapitha etc are some of the famous dishes of Baripada. The sweet dishes includes the Chhenapoda, Rasagolla, Rabidi, Jilebi etc and above all the Paiec also known as Khiri is also one of the famous dishes prepared in almost every house of Baripada.

How to Reach Baripada

The city of Baripada being blessed with natural locations which attract several tourists all around the year from across the country and hence the city is well connected via all mediums of transport.

Reach Baripada by Train
The Baripada railway station is said to be one of the older most stations of the state and the king of Mayurbhanj in past, Maharaja Shree Krushnaa Chandar Bhanja Deo was the first to establish he narrow-gauge railway network which connected the Chennai-Howrah route. Presently these lines are converted to the broad-gauge lines and have been made connected to the rest of the world benefiting the entire city of Baripada as well as several nearby small villages of it as well. The city of Baripada is connected to the rest part of the country by several trains that connect it with several major cities of the state such as the state capital, Bhubaneswar, Cuttack, Balasor, Badbil etc as well as the major cities of the country such as the New-Delhi, Mumbai, Kolkata, Chennai and many more. There are also a bunch of local trains that connect it with the capital city and several other cities and villages of Odisha.

Reach Baripada by Road
There are several mediums of road transport which connect the city of Baripada with that of the several cities of the state and also with the major cities of nearby states. The bus services are made comfortable with providing the A/C services in the buses connecting to the cities like, Sambalpur, Puri, Cuttack, Bhubaneswar, Keonjhar, Rourkela, Bhadrak, Angul, Bolangir, Balasore, and even to the cities like Jamshedpur, Kolkata, Ranchi, Kharagpur and Jhargram etc. Baripada is around 30 km from the N.H. 5 that connects it to the metro city of Chennai. There are also routes of NH 18 and NH 6 that connects the Kolkata-Mumbai route. There are also several cabs available to be hired from several major cities of Odisha connecting it with them. Tourist mostly visits Baripada to have the scenic view of the nature and the landscapes along with the Tiger Reserve and the Elephant Reserve located at a distance of around 30 km from the main city of Baripada.

Facts and Figures about Baripada