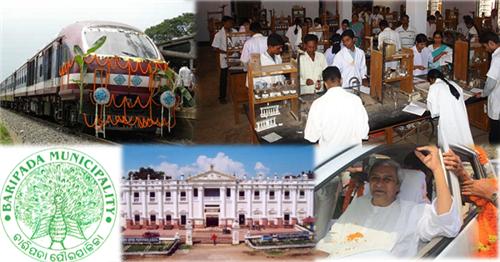 Law and Order of Baripada

Under the Department of Food, Supplies and Consumer Welfare, the District Civil Supplies Office is an office located at Baripada, the district headquarters responsible for the various schemes implementation and improvements in the entire district of Mayurbhanja. The Civil Supplies Office (CSO) works out from Baripada and also looks after the Public Distribution Systems, Fair Price Shop Registration and many more such collective tasks.

The Public Distribution System: Providing Rice at a very low price of Rs.2 per kg. This is on eof the vital schemes by the Government of Odisha to provide rice at Rs.2 per kg with the hel of various schemes of State and center as well. This is one of the major initiatives which helps in lessening the issues of hunger and also reduces the paucity and scarcity in the villages of Baripada and entire Mayurbhanja District. Presently Rice is being distributed at Rs.2 per kg to the targeted group with the schemes that includes:

The Antyodayanaa Jojanaa: The scheme being made to serve the poorest class of people which live in the urban areas as well as the rural areas of Baripda and are not enough capable to earn their meals. According to this scheme the Government of Odisha offers the Rice at Rs.2 per kg and a maximum of 35 kg of Rice is being given to every family that is counted under the Below poverty line and as per the data, 98,366 families are now covered in the entire district of Mayurbhanja.

The Annapurna Scheme: it is basically a scheme initiated by the central government to serve the senior citizens who all are above the age of 65. This scheme is mostly believed to benefit theses aged part of the entire population under the National old age pension scheme. According to this scheme the beneficiary gets 10kg of rice every month and that too free of cost. As per the statistics 3,955 numbers of beneficiaries are benefited by this scheme.

Other schemes include the Rice for S.T. / S.C. with BPL cards, APL Wheat by which people are offered wheat at Rs 15 per Kg, sugar being provided to AAY and BLP card Holders and every such family is being given 2kg of Sugar every month, Subsidized Kerosene oil – The PDS subsidized Kerosene oil for the ration card holders up to 4L per month.

After the I.T Act and the O.T.P act got implemented in 1956, the preparation of Master Plan was enforced with the central assistance. For the town of Baripada the Planning Authority was formulated by the government. The prime aim and goals of the organization being the improvement, expansion and development of the Baripada town under the jurisdiction of Baripada Town in order to ensure the sense of security among the current and upcoming in-habitants. The Baripada Special Planning Authority was established with the vision of preparing the urban centers. To form various development schemes in order to up-bring and develop the trade and commerce, industries, housing, transportation and several recreational activities.