The city of Baripada is believed to be a home to numerous tribes which have a great influence on the culture and traditions of Baripada as well. There are several festivals that are celebrated in Baripada of which many are the tribal festivals. 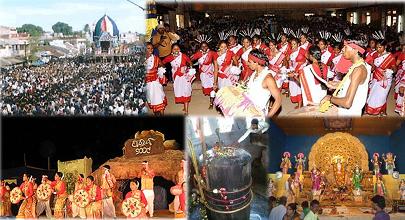 Festival of Ersim in Baripada

Ersim is a festival celebrated on the day of Paddy sowing by the tribes of Bhumija, Santals, Lodha and the Mahalis. The festival is celebrated on the day of 'Akshitrutiya' and the mother land is being worshipped on that day with lots of enthusiasm and religious fervor. On the festival of the Erism the Dehuri, who is said to be the head priest and also performs several rituals and a black cock is also sacrificed along with the Vermillion, non-cooked rice, incense sticks and flowers and fruits to the deity of mother land which bless its children, the tribe people with crops and they earn money by selling it. The holy motherland is worshiped all over Baripada on this festival of Erism. The mother land is believed to be the reason for the prosperity of the tribal people and hence this festival is celebrated much enthusiastically.

The festival of Harialism is also one of the agricultural based festivals which are celebrated by most of the tribal people of Baripada and nearby villages. This is a symbol of the crop being cultivated when matures and turns green; the festival is celebrated at that time in the villages of the entire Mayurbhanja district. It is said that while looking at the green crops the farmers and cultivators get immense happiness and thus the festival is celebrated. This also gives the signal to the cultivators’ and the farmers that this time they are going to have a great cultivation and can also maximize their earnings. Mostly the tribal farmers and the cultivators celebrate this festival with grandeur celebrations and invite their family members to the field and enjoy the time by spending their day there. Sacrifices of animals, along with flowers, fruits are offered to the mother land on the occasion of Harialism. 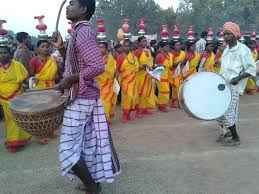 This is the festival which is celebrated by the tribes to please the rain god in order to bless them with rain and which is good for the cultivation done. Several offerings are especially done on this occasion to please the Rain god. A male goat is also scarified with several other offerings are offered to the rain god. It is believed that by offering these the god rain gets pleased and offers rain to the fields and the villages which help them get their crop grow well. In many locations of Baripada this festival is known as the ‘Bihuda Parva’ or the 'Ashadhi', and during this festivals the Bhuyans tribe invite the Rain God with all the religious enchantments and tantric rituals are also performed.

The Karama Festival in Baripada

During the months of 'Kartika' also known as the 'Ashwina', the festival of Karama Parvaa is celebrated and date which is fixed for this festival is done by the 'Dehuri', the religious head priest. A plant of altar is planted in the centre of the village and is then worshipped. Several rituals are performed along with the singing of songs and dances are performed their around the plants. The stories of God ‘Karamdharan’ are then recited and the blessings of the God are received. On this occasion the maids of the villages are offered food by the tribal people and the celebration is done in the Grand way possible.

The Makar Festival in Baripada

This is one of the prime festivals of Baripada being celebrated with immense enthusiasm all around the district of Mayurbhanja on the occasion of harvesting the crops. In the month of January as per the English calendar and as per the Odiya calendar in the month of 'Pausha' the festival of Makar is celebrated all over the Baripada. On this festival the celebrations are done and all the community people gather irrespective of their religion, caste and creed and they all together celebrate this festival.

The festival of Makar is also celebrated in various other parts of the country as different names. This festival lasts for some 3 odd days and of which the first two days of the festivals are known as the Chail-Duha which means the Soaking of Rice and the second day is called the 'Bahundi' and the third and the final day is known as the 'Makar Sankranti', the day of Makar festival. On the eve of this festival the kids of the tribal community burn bonfire on the coast of the rivers and enjoy the time. This burning of fire is known as the 'Kumbha'. Every house of the Baripada tribes the delicious cakes are being cooked and being distributed among the family, relatives and the friends. The deity of the tribes is also worshiped with special rituals. Various special dishes such as the mutton curry, local liquor known as the ‘Handia’ is consumed on the occasion of the festival. Dance is music is also the inseparable part of the festivals.

A grand fair is also organized on the Makar festival which is called the Makar fair at various places of Mayurbhanja district and also at the Baripada which attracts thousands of people who flock there from various places of the state. Special ‘monkey dances’ are also arranged on the occasion of the Makar festival. This is known as the 'Galienage' where monkey are being set to dance on the rhythms of the tribal music. The immersion of the idol of Tusu is also one of the major attractions of the Makar festival and this is known as the Tusu Bhasani. The Tusu is the deity of the tribes and is worshipped by the community people of the Mohanta tribes. Special Tusu songs are also being sung on this occasion and dances are also performed before the immersion of the Tusu idols in the rivers.

Explore more about Art and Craft of Baripada