Similipal is located at the center of Chhotanagpur which is also one of the most famous biotic prefectures of the country. Located in the district of Mayurbhanja Similipal is believed to have derived the name Similipal from that of the Silk Cotton plant famous in the state of Odisha as Simul. Also there is a hill near the forest park which is known as the Salmali Saila which means the hill for the Simul plant. It has also got mentions in the poems written by the world famous Odiya poet, Radhanatha Roy. 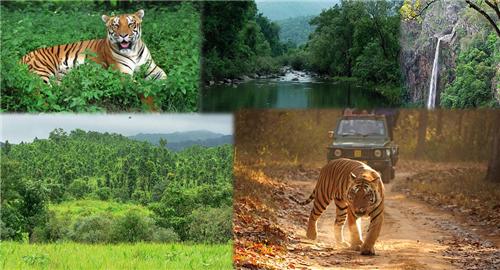 Baripada is the nearest city to the Similipal forest Park which is situated on the hills which has numerous valleys and peaks. Also the forest park is blessed with rich natural heritage and several waterfalls and streams which flow in almost all directions. The evergreen forests of Similipal with immensely spread grassy landscapes, steep and gleaming waterfalls, oblique rivers, the roaring tigers, running dears, the playing squirrels, chatting myna and several other such mesmerizing scenes can be viewed at the wildlife park of Similipal. The park is spread over an area of around 2750 km sq. and out of it the core area of the park is almost 303 square km. The wildlife park is also amongst the tiger projects and also one of the most famous national wildlife parks of India. There are several species of fauna and flora can be found in the wildlife park and as per the surveys done the accurate numbers suggests that more than 1080 species of mammals, 2350 plus species of the birds and more than 30 varieties of reptiles are found in the Similipal forest Park.

The Similipal Wildlife Park was proposed in the year 1980. Through a forest policy the management part of the park was brought in use by the ruler of Mayurbhanja district in 1985. It was a part of the royal empire of that time and was used to entertain the royal gust visiting the province in that time. It was a spot for the recreational activity, hunting and spending time in the past. A practice commonly known as ‘Kheda’ was very famous during that time which included the catching of the elephants in the reserve.

The hunting procedure known as “Akhand Sikhara” was used to be performed at the park in the past which used to last for some odd 6-7 days in the April month every year. Till the year 1946 the forest under the park of the present span used to be operated by the plan which was prepared in 1895 by the C.C. Hart by contract and lease. The prime focus was to avail timber wood and harvest it in order to maximize the earnings of the Royal exchequer.

Till the year 1946, park area was being exploited continuously according to the Working Plan of then but the new plan of the state union formed and implemented on the November 1948 got a pause over it, and declared it to be a part of Odisha. It was then utilized for the railway needs, marketable forestry, and other utilities outside the district of Mayurbhanja which was declared to not to be use by the ruler in order to protect the forest reserves and a great amount of people were employed in order to put a check on these activities. Later on the British government took the administration and put ban on the illegal venturing of the wood from the forests of Similipal. After the independence again the acts of cutting forest woods commenced and were also accompanied by the hunting of precious animals for their skin to make various leather products.

And finally in the June 1986 the core area of the Similipal Tiger Reserve which was almost 845.70 Sq km was then declared as the Similipal National Park. The SFDC (Similipal Forest Development Corporation) was also formatted to stop the exploitation of the timber wood from the forests of Similipal. As per the records there were some odd 63 villages which were located in the sanctuary and around 1240 villages were located on the periphery with the entire population dependent on the forest products only in order to meet their daily requirements. According to the MAB (Man and Biosphere), a program run by the UNESCO on the Similipal Biosphere Reserve which covered an area of about 5600 sq km in order to bring back the human population under the management of the Biosphere and to employ them and educate them about the necessity of the biosphere and its forest products which were being used by them. They were also being trained to protect the natural reserve and conserve the forest with several

The development of the eco-tourism of the Similipal forest reserve was then taken up in collaboration with the Similipal Eco-tourism Society and the Government bodies in the year 2006. The society was formed with the objectives to facilitate the services beneath the management of the forest park. The society has several members including the official and the non-official members of the management involved in the propagation and the development of the Eco-tourism in the area.

The Similipal Wildlife Park is situated near Baripada city of Mayurbhanja district. The Similipal Tiger reserve and the elephant reserves are said to be the most important part of the wildlife park. The highest hills of the park are said to be the Meghasani which surrounds the entire park and is also said to be the highest hill range of that area. Packed with mostly the Sal trees along with the human presence of Santhal tribe the Similipal park is expanded over an vast area of around 2,751 sq km. The average elevation of the Similipal Wildlife Park is said to 557.81 m and is also blessed with around 11 rivers which pass through the reserve. Among all the rivers the River Budhabalanga, Kharkai River, the Deo and Palpala Bandan are of great importance to the wildlife reserve of Similipal.

The wildlife park is also blessed with many stunning waterfalls namely Barehipani, Joranda and many more which are located at a very high peak and also adds a beauty to the park which drags thousands of tourist every year o visit the park. These waterfalls have witnessed the two of the most dangerous cyclones of the state in year 1982 & 1999 with no such major damages being taken over on them.

Similipal is situated at an average elevation of around 900 meters. The topography of the Similipal wildlife Park begins from the coastal plains which rise till around 1177 m above the sea level. The huge numbers of large and tall heighted Sal Trees are found in plethora in the forests of Similipal. Meghasani hills and the Khairiburu peaks seem welcoming the visitors to the park from a great height. The flower of Champa spreads the humble fragrance of it’s in almost all corners of the park. In the centre of the dense forest summer also loses its impact and the sun heat also seem decreasing its effects. Rivers like Salandi, Khairi, Budhabalanga and Palpala instigate from hills of Similipal and amble all the way through the forest just as the arteries and the veins flow in human body. Most of these rivers form the tumble torrents and downy falls post leaving those plains. The view of the Joranda waterfall and the Barehipani waterfall is mesmerizing and this attracts tourists the most. The silent forests of Similipal gets a loud noise often of the group of humming birds and several other creatures of the nature which have made it their habitat forever.

The Similipal Wildlife Park is said to be one of the precious treasures that is a home for more than a thousand of varieties of plants which belong to some odd 100 families. More than hundred varieties of orchids are also being found at the Park. The park is said to have complete mixed vegetation and hence is also known as the “Semi Evergreen Afforest of Odisha”. The plains provide the gazing ground to the animals that depends on the grass and also offer carnivores the place to hide. The forests of Similipal also constitute numerous aromatic and medicinal plants. This is one of the major sources of income for the tribes residing in the forests. One of the most famous herbs that is found in plenty in the Similipal forests is the Eucalyptus which is believed to be planted here in 1900 by Britishers.

The dense forests of Similipal along with the rich natural heritage and the river system serve an excellent platform for some of the most amazing living organisms of this world. It is believed to be one of the most wonderful experiences to live in these forests for a while and witness the true beauty of nature. The flock of elephants that passes through the forests gives a glimpse of one of the most beautiful sight. While moving upon the hilly tracks of the Similipal, one can witness the mesmerizing predators like Leopards, Lions and tigers respite under the shadow of trees engrossed in their own thought process.

According to the records there are some 43 varieties of Mammals, more than 29 species of reptiles and around 250 species of birds are found in the dense forests of the Similipal Park. Some of the chief species of mammals that are found here include the Asian elephant, Jungle cat, Sambar, Tiger, Common langur, Wild boar, Leopard, Giant squirrel, Barking deer and Chausingha (the antelope with four horns). Among the birds there are the Peacock, Hill Mynah, Serpent Eagle, Alexandrine Parakeet, Indian Trogon, Malabar Pied Hornbill, Grey Hornbill, Indian Hornbill etc are as well found here. The park also has a variety of reptiles found residing here which include the turtles, snakes, Mugger crocodile etc. There are several programs such as ‘The Mugger - Crocodile managing” has also taken place in the deep forests of Similipal with the motive of saving the reducing population of the Mugger crocodiles.

The temple of Kichkeswari located just at the entrance of the Similipal Park is said to have its connection with the deep history of the entire state and is also connected with the archaeological richness of the Mayurbhanja district. The hills of Similipal with several peaks and valleys amidst of it along with the plains of Udala at the southern part of the forest form a scenic beauty.

The forest of Similipal is delegate ecology under the Mahanadian Biogeographic expanse. The faunal and faunal symphony has a number of resemblances with essentials of that of the Northeast India and the Western Ghats.

When to Visit Simlipal National Park

The months between October and June are said to be the best time to visit the Similipal Wildlife Park although the park remains open around the year but the climate during the rest of the year is not suitable to visit the park. The permits to enter the park can easily be obtained from the check gate at Pithabatha.

How to Reach Simlipal National Park

Reach By Air: The Similipal Park is located at a distance of around 200 km from the Biju Patnaik International Airport and can be reached by road from there in almost 3 hrs. At around 310 km the DumDum airport at Kolkata can be reached in just 6 hours by road.

Reach By Road: The Similipal Wild life Park is well connected with the national highways which allows the traffic of various major cities to connect with that of the Baripada.