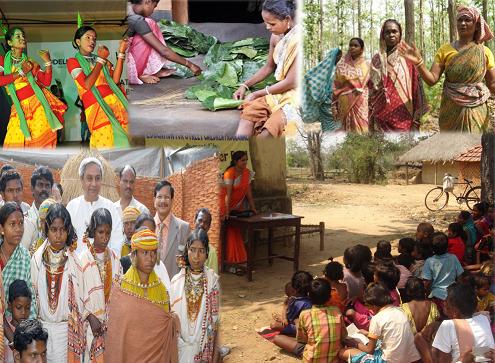 The Tribes Found Near Baripada

The tribal community also has further divisions and among all the most famous ones are the KOLHAAS and the BHUMIJAAS. These are the tribes which are found throughout the city. These are also found in various parts of the entire district of Mayurbhanja. These tribes are known for the special talents of theirs which includes the self-defense techniques, the art and culture, the handicrafts products etc. These tribes are said to be very much backward community and socio-economic vista of these tribes of Baripada is very much complex. These are the educationally, economically and communally backward and hence they get certain privileges in compare to the general caste by the Government according to several plans and schemes. Now they have got a distinctive image of them and they have emerged as one of the powerful communities of the Indian society. The traditional task of these tribal were to hunt the animals of the forest, grabbing the forest food, and some of them were engaged in the laborious task of mining and other activities. Now they are also allowed and rather given distinctions in various sectors, in the government jobs and in the field of education as well.

Lodha, Mankadia and Khadia are some of the major tribes found in the deep forests and even the villages of Baripada residing with their family and dependent on the forest and cultivation activities. The Mankadia and the Khadia community people are believed to be the most wandering food collecting tribes and hence have special mentions in the tribes of Baripada. These are mostly found on the hilltop of the mountain ranges in the forest of Baripada near Similipal and other mountain ranges as well. The Lodha community tribes seek special attention and hence are also offered special treatment by the local bodies and the government as well. They are given special education and medical facilities for their speedy fiscal and morel rehabilitation. The Santhals are also one of the famous tribal found in the villages and the dense forests of Baripada and the entire Mayurbhanja which are mostly involved in the irrigation and cultivation activities. The Morada and the Suliapada blocks of Baripada are said to be occupied by the tribal community people.

Statistics about Tribes of Baripada

Baripada is a city of Mayurbhanja district which is mostly filled with tribal people and as per the statistics found of all 63 tribes of Odisha the district of Mayurbhanja itself houses around 54. Some of the major tribes that are found here are the Bhuyan, Santals, Gond, Bathudi, Kolha etc.


Languages Spoken by these Tribes

The most common languages that are spoken by these tribal people are the Dravidian, Aryan and Austric also known as the Munda. The Saurti, Bathudi, Lodha and the Bhuyan community people are the one that speak the Aryan language and the language they use to speak is known as the northern sub-language and is also the sub-language of Odiya. No such identical literature is found about theses tribes which can provide the details of the tribes and their past. Yet the perpetual rivulet of literature endures which is believed to be in existence since generations and it can be noticed in the folk songs and the fold dance forms as well.

The Oraon and the Kissam Koya community belonging to the areas of Baripada and the rest of the Mayurbhanja are believed to be Dravidian spoken tribes. This is the least influencing language and literature found of the history. Tribes of Kolha, Munda and the Santhals are the ones which belong to the Austric family and are also the prime tribes which do not have their mother tongues.

Pandit Raghunatha Murmu is one of the famous personalities of Odisha, was born at 'Dandabas' a small village near the small town of Rairangpur. He is believed to be the father of the 'Alchiki' Script. He invented the script in the year 1925 and was said to be the renaissance in the history of the Santali literature. The 'Alchiki' is said to be the most prominent Austric language which is also proved its scientific existence. The literature of Santhaali tribe is believed to be enriched by the efforts of Pandit Raghunatha Murmu with his contribution to the culture in the form of dramas, Poems, Child literature, Grammar and Arithmetic, which use the 'Alchiki' language. The “Madhu Barnabodha” is one of the major books in 'Alchemed' and is also said to be a gem in the tribal culture of Odisha. The book of 'Parsipaha' which is basically for the kids is said to be one of the worth reading books ever written in the History of Odiya literature.

Kherawal Veera, Dalegodhan and the Biduchandan are the tribal dance and song which are said to be some of the very precious jewels of the Literature of the Santhali tribes. 'Lakachar Serenja' and the 'Hital' are the two of the other famous songs which are based on the renaissance of the tribal culture and with the precious foundation of the Pandit Raghunatha Murmu.

In the year 1939 Pandit Raghunatha Murmu first time presented his 'Alchiki' which was the handmade presentation at an exhibition near the city of Baripada which was found impressive by the king of then Shri Prataap Chandraa Bhanjadeo, who in return committed of its accomplishment. The Santhali language, script and language is something that is widely acclaimed in the history in various states of the country such as the Jharkhand, West Bengal, Assam and Bihar. This was the dream of Pandit Raghunatha Murmu which finally came true.

Culture and Religion of Tribes of Baripada

The tribes that are the residents of Baripada and the nearby areas of Baripada are very much religious and have faith in many gods and goddess. As per some of the orthodox tribes they believe the Sun to be the creator of the world and hence is the most important source of life on earth. They also believe the Sun to be there father and the land or the earth is said to be there mother. The earth is the only one which grooms them up and gives them the food to eat when they cultivate it on the lands. The Sun is also worship in these tribes but with different names in all the tribes.

These are some popular names of the Sun given by the tribes of Mayurbhanja, 'Thakur Jew', 'Bhagaban', 'Singabonga', 'Maranburu' etc. Similarly the mother earth is also given various names by these tribal communities which are, 'Basuti Mata', 'Bhumidevata', 'Dharitree Maa', 'Basumata' etc. These tribes are mostly orthodox and also believe in the ghosts and black magic and several other tantric rituals as well.

Like most of the other Adivasi which are spread all over the state of Odisha, the Lodha tribe of Baripada are believed to be the worshipers of God but they also believe in the sorcery and the witchery to which they protect themselves by worshiping the God in many ways. The Hindu Goddess Kali is also being worshipped by many of the tribes such as the Bhumija, Bathudi and the Bhuyans. The tribes of the villages and nearby areas of Baripada believe very much in the immersion of the dead bodies in the Ganga River which is said to be the one of the most holy rivers as per the Hindu Mythology.

Festivals Celebrated by the Tribes of Baripada

Connection of Goddess Ambika with Tribes of Baripada

Goddess Ambika is said to be one of the famous deity of Odisha situated at the city of Baripada in the district of Mayurbhanja. This is also said to be one of the Shakti peetha which are spread all over the India Sub-continent. The history of this shakti peetha is very much mysterious and the information about is not much available in the books of mythology. As per the legends the Ambika temple at Baripada is one of the famous temples of past and the backside of the temple was used as a farm land, and there also used to be a fort named as “Fort of Baga Samal” which was said to be the fort of Kings of the Bhuyan dynasty.

The Goddess Ambika was the preceding deity of the Bhuyan dynasty and was worshipped by the kings and the family of the kingdoms. The place where the temple was built once used to be one of the neat and flourished places ever. It is also believed that the place was of high importance due to once, one of the stork which leaped upon one hawk and by this thought the Bhuyan King built the fort here.

Explore more about About Baripada